A Tale of Two Dogwoods

In front of the Manor House at the Nature Center, there are two species of dogwood trees. One is the native Flowering Dogwood (Cornus florida), and the other is the non-native Korean or Japanese dogwood (Cornus kousa). Particularly at this time of year, the critical benefits of the native tree become obvious.

Plant species evolved together with animal species living in the same habitat. Flowering Dogwood evolved here, in Eastern North America, along with the insects, birds, and mammals native to our forests. Kousa dogwood evolved in Asia with the animals native there – very different animals.

Both species of dogwood have beautiful spring flowers, but the native Flowering Dogwood blooms weeks earlier – just as local pollinators emerge looking for nectar and pollen. Kousa dogwood blooms much later in the spring. By then, lots of other flowers have emerged and the need for early-season nectar and pollen is less crucial.

By the end of the season, the timing of these two species is reversed. Kousa dogwood produces its showy red berries early — in August. The berries of the Flowering Dogwood, on the other hand, start to ripen in October — just as songbirds need them to fuel their migration.

In Asia, Kousa berries are eaten by monkeys and other indigenous wildlife. Here, those berries are largely ignored. The berries are too big for songbirds. Squirrels and chipmunks aren’t interested either. Instead, Kousa berries end up where they fall, mashed by foot traffic and lawnmowers.

The berries of the Flowering Dogwood are an essential food source for migrating songbirds because they are full of nutritious fats and proteins. We have seen flocks of migrating birds descend on a Flowering Dogwood and clean it out of berries in a few days. Any berries that do hit the ground are quickly carried off by squirrels and chipmunks.

Nurseries and garden magazines may tell you that Kousa dogwood is a better choice for home landscapes than native dogwood because the Asian variety is more resistant to disease. The disease in question is anthracnose, a fungus that first appeared in the US in the 1970’s and quickly became lethal to native dogwoods. Research strongly suggests that the fungus actually was introduced to the US by importation of the Asian dogwood. Kousa dogwoods are more resistant to the fungus because they co-evolved with it and developed resistance over time. American dogwoods did not have that opportunity. The arrival of the fungus here was a near-disaster for this iconic American tree.

Fortunately, growers immediately began developing resistant varieties of Flowering Dogwood. “Appalachian Spring” was one of the first varieties to successfully fend off the disease. Other disease-resistant varieties are readily available now. “Cherokee Brave” and “Cherokee Chief” have pink flowers, while “Cherokee Princess” blooms in white. These trees do very well in our area. They prefer sun or part shade in well-drained soil, and benefit from organic fertilizer or compost. In periods of drought, they will need supplemental water. They never get too tall, and they make spectacular lawn trees.

If you’re looking for an ornamental tree with gorgeous spring flowers, great fall color, and an important role to play in the local ecology, skip the non-natives. You really can’t do better than Cornus florida, our own Flowering Dogwood.

This blog is authored weekly by Cathy Ludden, local expert and advocate for native plants and Board Member, Greenburgh Nature Center.

View all posts by greenburghnaturecenter

12 thoughts on “A Tale of Two Dogwoods”

Today's the big day! Giving Tuesday is the day where every act of generosity counts. This year, your Giving Tuesday contributions have DOUBLE the impact. When you donate to the Nature Center before December 15th, your gift will be matched, dollar for dollar up to $25,000!
Your kids can attend Winter Discovery Camp here at the Nature Center this winter. ❄️ Dates: February 21–25th, Age groups: K-1 & 2-3 - Registration for winter camp will be live starting tomorrow!
Happy Thanksgiving from the Greenburgh Nature Center! 🦃🌲
There's only TWO more weekends of the Holiday Train Show at the Nature Center! Visit us this weekend to marvel at the model display and explore the rest of our grounds. Don't forget to check out our train-themed goodies at the gift shop before you go! Books, puzzles and more make the perfect, thoughtful gift and support the Nature Center and green businesses. 🚂
Today on our Around the Grounds blog, we introduce you to a very "not-boring" shrub–Fothergilla! This native shrub flaunts impressive colors that span three seasons. Read more in our latest post today by visiting the link in our bio, and check out more Fothergilla shots on @cathyludden profile!
Thanks to everyone who came out to enjoy a festive fall weekend at our Holiday Market! 🛍 It was a great kick-off to our Holiday Train Show, which will be running on weekends from 10:00am to 4:00pm through December 5th. Tickets available at the Manor House reception desk! 🚂
Don't forget to include the Holiday Market and Train Show in your weekend plans! 🚂 Saturday and Sunday you can shop our sustainable craft market to find the perfect holiday gift that will bring joy to both the recipient and the planet. Plus—No need to fret about shipping delays!
Today on our Around the Grounds blog, we talk about two species of dogwood trees. Though both quite striking in appearance, once again we see that the native variation plays a crucial role in the health of our local ecosystem. Read more in our latest post today by visiting the link in our bio.
The Holiday Market & Train Show is just about a week away! Join us in shopping small and sustainably for the holiday season and enjoy our annual model train display in the Manor House. 🚂♻️🛍

For program, birthday, and facilities bookings please email Chloe at chloe@greenburghnaturecenter.org or call us at (914) 723-3470 and we will get back to you as soon as we can.

Double the impact of your Giving Tuesday gift

Your generous donations will be DOUBLED this year! Donate to the Greenburgh Nature Center’s end of year giving campaign before December 15th and all contributions will be matched up to $25,000! Celebrate Giving Tuesday by supporting your favorite nature center this year. 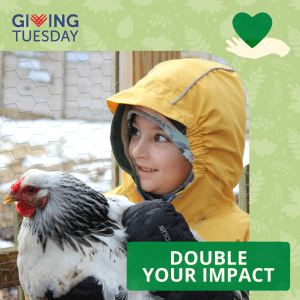